Jump to content
Jamaica
My Wedding Trip to GPLH
Followers 0
This is a review of: 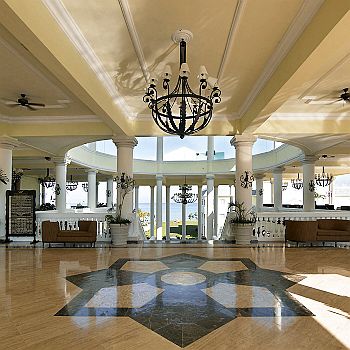 Don't get me wrong, the resort is beautiful!!  And I do not think it would be a bad place to stay if you are traveling with less than 4 or 6 people.  But, they made me and my group feel like a total and complete inconvenience at every turn.  My husband's family from Australia traveled all the way to Jamaica, and I feel terrible they were treated so poorly.

The trouble started the first night when we were going to one of the buffets for dinner.  We had my family and my husbands family, so 9 adults and 3 children.  When we got to the buffet and asked for a table for 9, it was as if they were mad that we were there.  They had an attitude with us and said it was going to be a while b/c they needed to set up the table.  Funny thing was, the place was nearly empty.  And to try and get a beer or a glass of wine, well you would think you were asking for a chunk of gold.  It was ridiculous.  After dinner, my husband and I stopped by the front desk to find out where we could get a bottled water.  Well, Aiysha at the front desk answered (with attitude I might add), "You have 2 bottles in your mini bar", when we told her we had already drank the 2 bottles, she proceeded with "We do not have any at the front desk."  We explained that was fine, but we just wanted to know where we could get some water.  This is where is just gets funny, as we get the old "LIKE I ALREADY TOLD YOU, WE DO NOT HAVE ANY, IS THAT GOING TO BE A PROBLEM??".  At this point, we just walk off, and my husband is complaining at how terrible the service had been that night.  Another employee overheard, and asked what the problem was.  We explained, and he delivered water to our room the moment we got there.  So, we were hopeful that it was a fluke experience and tomorrow would be better.

The next morning we met with our wedding coordinator and photographer.  The photographers (TrueColors) were AWESOME, and I would recommend them to anyone!  The wedding coordinator (Omeshia) was good.  The only trouble with her was that she kept pushing me to spend more money on things I didn't feel we needed.  And she told me that there wasn't a plug for an iPod player when there really was.  I think she just wanted me to rent the resort's sound system.  We spent the day at the pool bar, which was great...bartenders there were lots of fun, and provided great service.  That night at dinner was more of the same, trying to get seated at dinner, explaining that we weren't sitting together, we would sit in 2's, 4's, whatever was easiest.  But, they were still mad we were there.  I have no idea what the problem was.

The next day was Friday, the day before our wedding.  We spent the day at Sunset Cove, and the restaurant there is great!  Rhori, one of the servers, is an EXCEPTIONAL young man, and the best employee the resort has.  He is fun, respectful, and all around a great person!  He was one of the only employees that made me feel like having our wedding there was something special.

Friday night......what a nightmare!!  Our rehearsal/ welcome dinner for all of our guests.  My husband called for a cart to pick us up at 5:30; dinner was at 6.  At 6, still no cart.  So, he called again.  At 6:20, once we had walked half-way (I wore heels, and it is a good 15 to 20 minute walk in Jamaican heat...no fun when you are dressed up for a wedding event), the cart came.  We got a ride half-way there.  Haha.  We were told the only place we could eat with a group of 26 was Xaimaca, and it was supposedly air conditioned.  Now, at all of the a la cart restaurants, the gentlemen are supposed to wear long pants.  However, the night before, at the Italian restaurant, most of the men were in shorts.  So, we asked one of the employees, and he said that it didn't really matter as long as you were dressed appropriately, and not in swimwear.  My Dad and my brother both wore shorts the next night based on what we were told by the Grand Palladium employee.  Remember, it takes about 15 to 20 minutes to get back to the rooms where we are staying.  The restaurant would not let my Dad or my brother inside, despite my kind pleads for help.  I was told it is policy, and they wouldn't do anything.  They did not care at all that it was my rehearsal dinner, and said they couldn't make an exception.  The funny thing was that my Dad and my brother were both dressed very nice, is khaki shorts, and button up shirts with nice sandals.  There was a girl in there in denim cut off shorts that may as well have been underwear, a wet bathing suit top, and a white tank top, with the wet chest showing through.  There were guys in there with hats turned sideways and t-shirts with holes in them.  But, they wouldn't let 2 nice looking, clean gentlemen in for a rehearsal dinner.  So, my Dad and my brother missed most of my rehearsal dinner since they had to go back and change.  It was so upsetting and really ruined the whole night.  Not to mention that the AC wasn't working, and it was like a heat box in this place and everyone was miserable and couldn't wait to back outside.  It was really not at all what a bride wants the night before her wedding.  In all fairness, the filet was delicious, and the desert was really good too.  But, they made everyone have their steak cooked the exact same way, AND they make everyone eat steak.  Each person has to eat the exact same thing....how is that even possible with allergies and such?  Ridiculous.  I would think they should be able to give each guest 2 choices at minimum.

Our wedding was scheduled for Saturday morning at 10 AM.  I chose 10 AM b/c I wanted to beat the heat, and get everyone in the shade before the sun became too intense.  I had to pay $150, in advance, to get my hair dresser and makeup artist into the resort for 3 hours.  I called the day before the wedding coordinator and the front desk to ensure that there would be no problems when they arrived.  I was assured their day passes were ready and they would be allowed in at 7 AM.  Well, wouldn't you know that at 7 AM, Rashel, my makeup artist (who is an AMAZING artist, btw), is calling from the front gate and telling me they will not let her in.  An hour later, they are finally in the resort, and we are an hour behind on hair and makeup for me and the bridesmaids.  Not to mention that the florist doesn't show up with the flowers until 10:50, almost an hour after the ceremony was supposed to begin!  So, I finally arrive at the ceremony site at 11.  Come to find out, my fiance and all of our guests had been left standing outside since 10 AM.  No one had let them know what was going on, and they were all out there roasting wondering where we were.  Such a joke.

The ceremony went great other than starting late.  The officiant did get our names wrong at first...he thought we were the 12 o'clock wedding.  But, he was good other than that.  Funny and nice.  We had a cocktail hour following the ceremony, and it was nice as well.  The resort "allowed" us an extra 15 minutes since they had made us an hour behind.  But, we did still miss 15 minutes of the cocktail hour from starting late.

That night was another disaster.  Going to eat, couldn't get seated, our guests being treated like crap...I finally crack and end up in tears.  I just felt so bad that I am the one who brought all of these people to this place.  They all spent their hard earned money to come here, and it wasn't a good experience.

In closing, my point in writing this is to warn future brides not to have your wedding here.  I would not go back to the Grand Palladium if someone paid me.  Luckily, we had a great honeymoon at Tensing Pen in Negril.