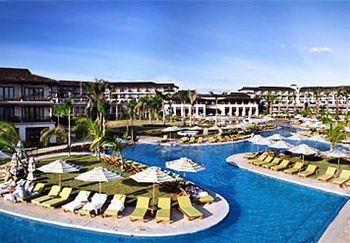 We didn't have our wedding at the Marriott (and I'm SO glad we didn't), but at the end of our weddingmoon we stayed here for one night. I'm SO happy it was ONLY one night.

We showed up to the Marriott around 1:30, my husband went to park the car while I tried to check in. The front desk (it's not really a front desk, but a room with four separate desks), would not let me check in because the reservation was under my husband's name - I get that, but I kept getting dirty looks and they wouldn't let me on the wifi to text him to hurry up. We weren't greeted with drinks or water either, which would have been nice. We checked in and the concierge informs us our room isn't ready yet - we figured, because it's only 2 at this point, so he suggests we go for lunch. We head to azul. The waited puts down two glasses for water that were dirty, and proceeds to pour water into them, sees me eyeing the glasses, sighs and takes the glasses away. The food was okay tasting... but more on that later.

We had booked a king room, so imagine our surprise when we, the bell boy and all our luggage open the door and it's two double beds. The bell boy tried to call on his headset, when no one answered, he tried to use the room phone, and no one answered. So we, the bell boy and our luggage head back down to the lobby/front desk room to figure this out. While my husband is arguing about us paying for a king, there's a woman next to us arguing that she booked two double beds for her kids, and why do they have a king bed. While my husband is working out the room situation, about a half hour after we ate, I now have to run to the bathroom, it was not good.

The pool is lovely. But the staff, aside from the bell boys, were awful. The beach is very rocky except for a very small strip of very shelly "sand."

For dinner, we had tried to book a reservation but were informed the only place we could have a reservation at was Azul. I was not willing to go back to the place I had gotten sick from earlier. So we went to the buffet. Expensive for what it was, and not that good either. The selection was mainly a make your own taco stations and that was it. The desserts were very good though. However, while we were eating dinner, we ended up being hurried out so they would set up the room for breakfast. That was around 8:30.

The entertainment was one lady, singing songs along with a karaoke type boombox... and not very good at it.

The rooms were gorgeous. Bed was super nice and comfy, loved our balcony, the bathrooms - I'm a fan of a separate toilet room.

The next morning we decided not to chance the buffet and ordered room service. The food arrived in a timely matter but it was just bland and not good. Even the fruit was bland.

I would not recommend going here.