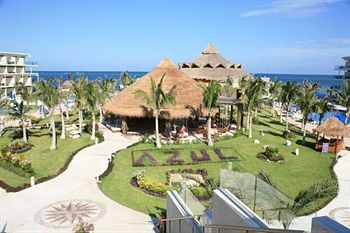 My now-husband and I were married here on February 27, 2017. This is a review of the resort and the wedding staff, which I'll write separately since they're basically separate entities.

RESORT: The grounds are gorgeous and the rooms are very nice. We booked a swim-up suite. We checked in and were led by a bellhop to our room. We were escorted to a suite with a balcony, but not a "swim-up." When I asked the bellhop if this was a swim-up suite, he told me no; I explained the situation, he called on the room's phone, argued with someone from the front desk for several minutes, and then handed me the phone. I explained to the employee the situation and was instructed to return to the front desk. Upon walking back the lobby with all our baggage, we were informed that the swim-up suites were all booked and our suite was having "a maintenance problem." No one said this when we checked in, and we were told we were being led to the room we booked- hence our confusion.... We had been moved to a honeymoon suite, which the front desk manager called an upgrade (not actually an upgrade, since it's not a swim-up). We asked for a refund for the extra money we paid for swim-up and were told no.

We were told that as consolation, we would receive "premium benefits," which were said to include reservations at the resort's upscale restaurant. Upon arriving at the concierge hut at the specified time to do so, we were told that our reservation only covered the cheaper dining option there which was already booked for the next 4 days of our stay, so we were unable to use this reservation. We also experienced very long waits at all of the restaurants on the property (probably a money-saving tactic to funnel people into their buffet restaurant). The Italian restaurant was not very good at all, but the Tapas restaurant was pretty decent. We are from New Orleans, so we're used to good food.

WEDDING: Before actually arriving at the resort, we coordinated with Azul's wedding staff by email, which was a TOTAL NIGHTMARE, specifically with Javier. I am not exaggerating when I say I have never dealt with such unprofessional staff. It took at least a week for them to respond to all of my emails and the language barrier was a challenge, to say the least. They required all communication be in a chain on a single email, meaning that the exact same email had to be replied to for over a year. Separate emails would have been easily searchable, different subject lines would have been good, but instead it was all one jumbled mess of an email. We had a wedding with 30 guests in attendance, which for an international destination wedding is quite a large group. We spent a LOT on this wedding, and not once did I feel like I received customer service deserving of such a client.

When we arrived at the resort, we had a meeting with the wedding staff where we reviewed all of the selections I had previously made. This went relatively smoothly.
On the actual wedding day, I was instructed to stop by the office at 10 am and sign a form stating my preference for a weather contingency. We had not previously agreed on a contingency plan for bad weather (I should have known better, but being a first-time bride planning on my own, I didn't; however, Azul does this every single day- it should have been addressed). The morning's weather was nice, and Gaby told me that in case of rain, the wedding would be moved to the Sky Deck adjacent to the lobby. This is a nice location, and I agreed.

Later on, about 3 hours before ceremony start time, two Azul employees entered my room as my bridesmaids, the photographer, and I were doing the "getting-ready" shots, and before even greeting me asked, "What are you going to do about the weather?" Since we had been in our room and focused on getting ready, I hadn't realized it had started to sprinkle outside. When I asked what specifically they wanted me to decide, they told me they would move our reception to Spoon, the large buffet restaurant.... This would be the equivalent of moving a private plated wedding reception to the middle of the buffet on a Carnival cruise.... completely unacceptable. When my mom and I tried to explain that our plated 4-course dinner reception would not be taking place at the buffet, they moved upstairs to try and talk my fiance into agreeing with them. Thankfully, my mother and bridesmaids talked them into doing the reception in a ballroom, and it turned out okay. However, we were not apologized to at all for their unprofessional behavior, and instead they came and interrupted me about writing them a positive review at my farewell brunch with all my guests the next day.

Overall: If I could do things over, I WOULD NOT GIVE THESE PEOPLE A DIME, much less the 30 grand we spent here to be treated like we were at a Best Western.