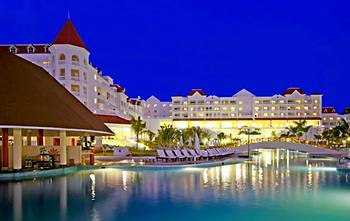 I just had my wedding here on January 23, 2016. There was a couple of hiccups but overall the wedding itself was a great time.

We arrived at the resort on January 21. We were picked up on a bus and given our package that included our bracelets and information packages. We had a couple of packages missing for some of our guests so they had a slower check in than the rest of us. We had the Romance Extravaganza Package so us and our parents were upgraded to the Don Pablo Section while the rest of our guests were on the Grand Bahia side. We got there and were given champagne and it was a quick and easy check in. My husband and I got to our room and it contained two double beds. I called down to the lobby and said that we wanted a king and they said they would work on it. (I confirmed with my travel agents she said that she specifically marked a king sized bed for us and bride and groom to make sure but the hotel still blamed the mistake on her). We were told our meeting with the coordinator would be the next day.

January 22-We went to our meeting the next morning with the coordinator and dropped off all of our decorations and told the coordinator what we wanted. We were having our wedding at 4PM at the gazebo and our reception at 6:30PM at Picsis. We even gave her table mockup pictures of what we wanted them to look like. My husband specifically asked who would be setting up the reception site and she said three times that they would be. I told them my brother would stop by and help them later on to make sure everything looked just right.

We then met with the Tropic One Team for our 25 free pictures(We brought our own photographer from home). The Tropic One team is so great and easy to deal with!!!

That night I had pre-booked an ala carte for our group of 44(2 groups of 22) at the Garden Grill. The 1st group showed up and they basically told them that they didn't have a reservation. My mom came and got me and I went there and after arguing with the manager of the restaurant I went to guest services and they basically told me there was no reservation. I lost it then and made a big scene and then they finally made something happen. They finally said they couldn't get us in anywhere but could get us in a buffet together that was fairly quiet. It ended up being nice to be altogether but they wouldn't have done anything had I not lost my cool.

January 23-The next day was our wedding. We got a call from front desk that day saying that they were going to move us at 4,. I told them that doesnt work seeing as how we were getting married at 4. They said they would call back but I told them I wouldn't be back until noon as a I had a hair appointment.

We headed back to my room and started getting ready. The Butler(A Perk of the Don Pablo) stopped by and said he heard I was moving today at 4PM. So needless to say part of my getting ready with my girls was consisting of packing up everything and frantically running around making sure everything was ready to go. It was very frustrating they couldn't accommodate us sooner. It was a huge pain to be packing when I should have been relaxing and enjoying my day...

The day was also stressful due to the rain. It was raining on and off all day so the wedding was inside/outside/inside/outside until the final inside call was made. This was stressful but no one's fault.

The wedding was pushed back a bit due to the rain so we ended up getting married around 4:30 which really didn't leave much time for pictures... The wedding ceremony itself was great. I basically wrote out everything I wanted him to say and our own vows to say and everything went without a hitch. The Minister was great... his name was Errol Grant.

We had the steel band and champagne and canapes for our gusts after while we went for pictures. The time was pretty short but we made it to Piscis by 6:20.

So the biggest hiccup with the wedding was that our guests were instructed to show up at Piscis about 15-20 minutes early but when they showed up nothing was set up and my suitcase full of stuff was just sitting there. My brother had run over there to check on the set up before the wedding ceremony, right after the wedding ceremony and a half hour before it was supposed to start and couldn't find anyone. When my guests showed up, my wedding MC's and parents started setting up everything and basically had everything set up when the coordinator showed up with the bartenders, rest of staff, etc... My mom lost it on the coordinator because she knew everything was supposed to be set up by them(If this would have been the case and they told us this, I would have assigned some people who would willingly have done it but they said they would do it three times in our meeting).Needless to say they didn't tell me this until the next day because they didn't want me upset but I knew when we showed up to the side door and they said they weren't ready yet something went down.)

The cake was beautiful but they bring it out right after supper so we didn't serve it and they took it away right away. Looking back I wish I would have asked them to take it our room or store it or something. We could have saved tiers of it in everyone's fridges and ate it another night and then I could have brought home my top for our 1 year anniversary.

We had our program and speeches from our MC. They gave them a mic and podium for free which was nice. We had our first dances and then about 10 minutes into the dance the power to the DJ went out for about a half hour due to the rain and the cords. We ended up going until 11:30 due to the power being out and lateness of the supper starting which was a little less than 2 hours that they said but the staff had to go catch the bus. My dad tried to tip them to stay later but it was no go. It was midnight by the time we ended up leaving the tent and heading to the disco.

January 24-We were all moved into our new room with a king but we didn't realize we were right next to the room that they kept all floor supplies so every morning at 6AM the staff would be in there banging and chatting and laughing. It was so hard to sleep. We had to turn on the TV every morning to try to drown the sound out. We were supposed to have breakfast in bed that morning and I called but no one could give me any answers. Luckily they ended up knowing they messed up and send us breakfast the following day.That day we headed into Ocho Rios to shop. It was a little sketchy as on Sundays most things are closed but some are open as there was a small cruise ship in that day. The market on a not busy day is also sketchy as they really want you to buy and kept trying to pull some of us away from the group. We quickly got out of there as most of us didn't enjoy the experience. (I have been to Mexico many times and been to different markets and never had an experience like that).

That day my dad went down to confirm the ala cartes for the group on Tuesday at Don Pablo. There was four groups at four different times. They said yes they were confirmed and wrote on the top of my sheet of paper where I had them all printed that all four times were confirmed.

January 25-The next day was the Dunn's River Falls and Catamaran Tour. This was a great tour and recommended. Bring water shoes from home as they are needed to climb the first part of the falls and renting wasn't enticing to most of us. (Cool Runnings Catamaran is the company).

January 26-We bummed around the hotel for most of the day. That afternoon my husband and I headed to the guest services to make sure the ala cartes were good and they said yes they were booked and gave me slips except they only gave me three slips? I asked them about the 4th reservation and they said there were only three. I showed them my sheet and they tried to track down the person who wrote it but couldn't find anything of course. Luckily some of the wedding guests had already went and booked ala cartes because they knew they were a nightmare and figured this would happen so  then only didn't have a reservation for 7 people instead of the 11 we originally thought. After sitting there for and hour and half(my husband ended up sitting there because I was getting angry and he told me to leave) we ended up with reservation for the garden grill for 7 people. The said they couldn't give us a slip but that was where we were to be. We showed up at the restaurant that night and surprise surprise no reservation. My husband(who never gets angry) started to get into an argument with the manager and we had to call guests services again and talk to them and then handed the phone to the manager. We finally got in and had a nice meal.

January 27- We went on a tour with Rosemarie Ellis of the Blue Hole and River Tubing. The excursions were fantastic. The Blue Hole is an amazing place where you rappel down waterfalls, just off of cliffs, and slide down natural waterslides. The river tubing was also fantastic and relaxing but also more rapids than I thought there would be. The only downfall we found was at the end when tipping. We gave them a 20 and then other guide came up and asked for his, and when we said the 20 was to be split, they said it doesn't work like that... bit frustrating.

Overall the wedding was great day besides the couple of hiccups and rain :(. The hotel is nice but needs a couple of improvements in the communication side of things. If the ala cartes would have worked out perfectly and not been such a thorn in my side I think I would have enjoyed it more. We just came to expect issues with every ala carte we booked which shouldn't be that way. We also were supposed to have a romantic candlelight dinner one night but we weren't told which night or no one confirmed with us when it would be so we didn't end up doing it.