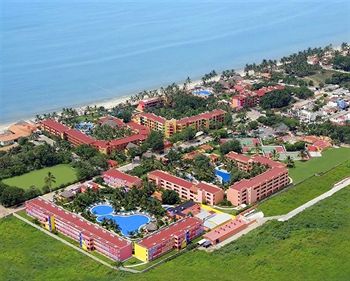 We just returned from a Christmas trip to the Royal Decameron (RC). As a disclaimer, this is NOT a wedding post, we simply went to the resort for Christmas to scout it out and see if it was a possible wedding venue. We were gravely dissappointed. We are no longer considering this resort as a wedding option. Here is a short story of our trip:

My family went to the RC in Puerto Vallarta for a 10 day trip, encompassing Christmas and New Years. My family has been to the resort before, and my parents alone have gone there many times. At check in, our rooms weren't ready. We were told they wouldn't be ready for 3 hours! My mother was frustrated, especially because they've stayed at the resort before and she had emailed the resort requesting specific rooms and had received confirmation that they would give us those rooms. So it was shocking when we arrived and found out that our rooms weren't ready, they weren't the requested rooms, and that there was no record of my mothers email communication about rooms. Our luggage was set aside and we were asked to come back in an hour. We returned in an hour, and the staff had completely forgot about us, and gave the ready rooms away to the bus load of people that arrived half an hour after us. The staff apologized, then rushed around to find us two rooms that were near each other. We finally settled on 2 rooms in block 5.

The stay was ok for the first 4 days, difficult to get dinner reservations, but the beach and weather were great and we saw dolphins in the bay almost every day! My fiancé and I met with the wedding coordinator (Claudio) and talked about wedding packages. He didn't have any photos or packages to show us because his computer was broken, but he took down my email and told me he'd send it all. He wasn't very helpful, and we felt very rushed during our appointment. I received the email a day later but it was a basic power point without any photos! We couldn't to talk to him for the rest of the trip because he was busy planning a wedding that was scheduled to happen at the end of the week. (the wedding ended up getting rained out and rescheduled for the Friday after we left) At day 5 is became overcast, then it was overcast or rainy for the remainder of our trip. We still managed to have fun, still swimming and playing at the beach because although it was raining it was still warm.

Our major frustration began on New Year's Eve, when we had the fancy dinner buffet, where I was upset to find that the majority of the selection was fish and shellfish. I'm allergic to shellfish, and the food isn't labeled with ingredients so I had a very small selection of food to choose from. I ended up having chicken, various salads, focaccia bread, and cream cheese. After dinner we went to the disco parking lot to watch the New Years show and it started raining, but only sprinkling. The tables were all out in the open, so we weren't sure what to do if it really started raining. The beginning of the show was excellent, unfortunately, I didn't get to stay long because I started to feel extremely ill. I excused myself from our table, and ran back to the room only to get sick repeatedly in the bathroom. After about a half hour, I started to feel a bit better so I had some water and headed back to the show. Once I returned I tried dancing, but started to feel I'll again, so I sat at the table with my fiancé and watched my parents and sister dance and celebrate. Then the sky opened up and it started pouring like never before! Everybody cleared out of the celebration and ran for cover. I started feeling exceptionally sick, so I ran to the Disco bathroom and got sick. There was an other girl In there getting sick and her sister told me that her brother In law was so sick from dinner that he couldn't leave the room.

The rain subsided so we returned to the show, then we did the countdown and it started pouring at midnight and everybody ran to their rooms. At that point, I became violently ill and I knew that I had severe food poisoning. I continued to get sick, and lost all control of my bodily functions. It was one of the most terrible experiences of my entire life, and I do not wish it on anybody. I was still very sick in the morning, but was gaining control and the nausea was manageable. I learned that my father had also gotten sick soon after midnight, and he was still ill in the morning. We determined that the cream cheese is the only item that we had eaten in common, and it must have been what made us sick. We were supposed to check out at 11 but or flight was not until the evening and we wouldn't be leaving the resort until 4pm. My mother went to the front desk and pleaded to have late checkout on account of my father and I being very sick and needing to be close to a toilet. The front desk staff, and the wedding coordinator that we had dealt with, were not helpful or understanding. Their argument was that we had no proof or record that we had food poisoning, because nobody saw a doctor last night. My mother said that we were so sick we couldn't leave the bathroom, which is why we didn't go see a doctor. Also, that we would go see a doctor that instant if it needed to be recorded. The management said that it was after-the fact, and they wouldn't allow it. After much arguing, and my mother threatening to have my father vomit In the lobby, they settled on giving us one room late checkout at no charge, and asked my mother to leave, and told her that she was complaining too much. She was livid after being treated that way.

After this trip, and the fact that my father got food poisoning also on their last trip to the Decameron, we will not be considering the Royal Decameron as a wedding venue, and in fact, we will never be returning there.