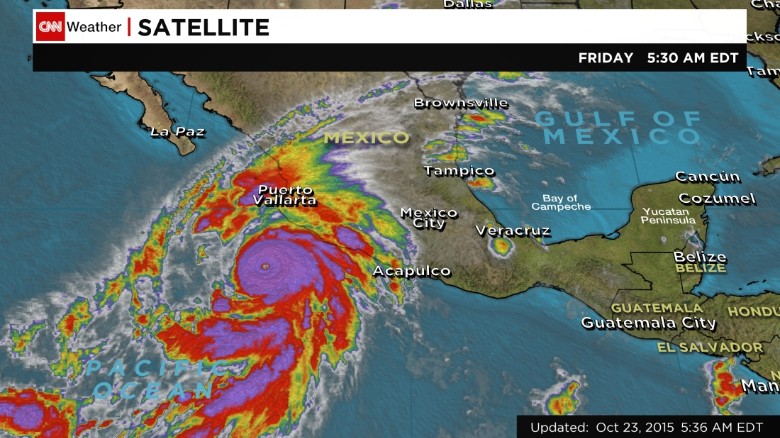 Hurricane Patricia is expected to hit Mexico's Pacific Coast on Friday, October 21, 2015, prompting the closure of airports in Puerto Vallarta and Manzanillo, where resorts have also begun to evacuate their guests.

The Category 5 storm is expected to be one of the worst storms in Mexico's history and is threatening to batter popular resorts and small fishing villages along the nation's central Pacific coastline, according to the World Meteorological Organization.

In Patricia's path are the states of Nayarit, Jalisco, Colima, Michoacan and Guerrero, including the resort towns of Manzanillo and Puerto Vallarta, according to the Los Angeles Times.

The hurricane will make landfall along the coast of Jalisco state -- which includes the Puerto Vallarta and is also close to Manzanillo and Colima -- between 6 and 7 p.m. EST, according to reports. People in the area have been told to brace for its 200-mph sustained winds and torrential rains.

Authorities have already declared a state of emergency in several municipalities and have closed airports in the affected regions. More than 7,000 tourists in the state of Nayarit will have been evacuated to the city of Guadalajara, about 125 miles east of Puerto Vallarta, by the time the storm hits land, according to officials.

Destination brides and grooms planning to travel to the affected areas in the coming days, should immediately contact their travel agent, airline provider and/or resort for an update on the storm's impact on their travel plans.