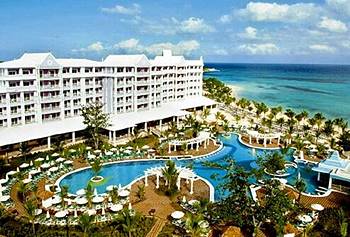 By Raychi, May 19, 2017 · 995 Views · 0 Comments
Pros: Wedding
Cons: Rooms
This was my 3rd time staying at this hotel and so of course we always have a great time hence our return. However this trip unfortunately my daughter caught hand, foot and mouth disease (probably from one of the high chairs in the main restaurant as they never seem to clean or sanitize them)! Aside from this my husband and I renewed our vows on the beach and it was perfect. It rained almost every other day except the day we had our wedding. We had 25 guests and held a cocktail reception after the ceremony which was held at the Dunns River bar which is an open roof bar overlooking the ocean (opposite the entertainment stage). This was later followed by our semi-private reception dinner held on the balcony of the Mamme Bay restaurant. It was pretty much private as we never saw any other people except when going to the salad buffet. Later we had an after party by the pool where we had our first dance which was awesome! The highlight of our trip were the pictures! We hired Digital Memories and Diana Campbell and her team were FANTASTIC! They did our photographs and our video and were able to work with our budget to give us what we wanted. They were so amazing that they joined in some dancing at our after party, this helped everyone relax more and they were able to get some very natural shots. On top of this we were leaving to go home 4 days later and they managed to edit everything and give it to us the day we were leaving to go home. I HIGHLY RECOMMEND Digital Memories. They are based in Jamaica which makes life easier. The hotel photo packages were way overpriced for what they offer.....don't waste your money. You can contact Digital Memories via email - dmcvideo@hotmail.com
Also don't bothered with tons of decorations for your special day....trust me you don't need it. Small touches here and there like chair ties and favors (Amazon) other than that you and your dress is all you'll need.