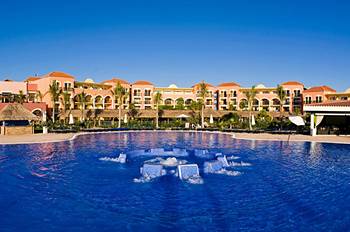 My husband and I traveled to Puerto Morelos for our wedding. We arrived April 5 and stayed for 10 days. We had 46 people all together there. Overall we had a great time at the resort and our guests seemed to enjoy themselves as well. The staff were friendly and really work hard there in the heat. We have only been to another all-inclusive in Puerto Vallarta a few years prior. Normally, we stay at little hotels when we travel. So I am no expert at resorts and we are generally pretty low maintenance people.

Restaurants: We mostly ate at the main buffet because the resort restaurants were so busy. We were unable to make any reservations, which was a big inconvenience. If you upgrade to their Privilege status, you are able to make reservations the day you arrive for your entire stay. We had some some friends wait up to 2 hours with a beeper at certain restaurants. The buffet food was pretty good. The only day that most of us did not enjoy was the Asian food night theme at the buffet. It just was not very tasty. Otherwise, the other days were pretty good to excellent. We managed to eat once at the Route 66, Villa Marina, Rittrato d’Italia, and Hacienda Los Girasoles. These were all pretty tasty. We really wanted to try the Japanese restaurant but it was always busy and was closed for a private function one night for dinner. I really think guests should be able to make reservations for dinners at these restaurants regardless if they are Privilege or not. Maybe have a small fee to pay if they do not show up for their reservation??

Mario was tending the lobby bar while we were there and he was excellent! What a hard worker and speedy at making drinks. Just thought I would throw that in there.

Pools: We went during the American’s spring break so the resort was full and busy. Being so busy, many people had to get up early at 6ish to reserve a spot by the pool with a towel. The pools were great though and seemed cleaned. We hung around the kiddie pool a lot because of our friends with little ones. There was usually an empty chair in the afternoon. I would have loved to have a reclining lounging beach chair there though. Carlos was tending the bar there and was fabulous! Sometimes, it would take a while for the servers to come by with drink orders while you are at different pools and at the beach so we would get up and get our drinks ourselves. I have a feeling that a lot of these servers are serving both the beach and pools, so maybe having extra servers available would be nice.

Beach: There was a bit of seaweed at the beach, which they try and clean with the mulcher tractor machine. There’s not much else they can do about it. It’s the sea and there’s seaweed in it. There’s been a problem of lots of sargassum (2 different types of floating seaweed) at that coast. We later went to Playa Akumal, Tulum, and Mahahual and there is plenty of seaweed there as well.

Rooms: The rooms were clean and we had no issues sleeping in the beds. The maids were very friendly when we encountered them. They folded cute little animals out of towels on our beds. On our wedding night, they sprinkled rose petals everywhere which was lovely. The resort did not allow for late checkout for our guests even though it did not seem as busy once the spring breakers vacated. This was inconvenient for our guest traveling with babies. Their flight was not until 7pm and their airport transfers were not until 4pm but they had to leave the room by 12pm I think. Most of them were able to book a shower appointment at the spa.

My uncle had a bit of a mix up while trying to check in. Somehow his reservation got mixed up. Not too sure what was going on with that. Anyways, my elderly aunt and uncle tried dealing with it for an hour and finally it was sorted out. I just felt bad because they had just been on an 11 hour flight from England and stuck at the Cancun airport for 3 hours and then to arrive at the resort only to be told that their reservation had been cancelled. So happy that it was sorted out though.

Wedding: The wedding planners had a bit of difficulty getting back to me via email in March prior to my departure. It took a few weeks for them to respond. Going down there, I can totally see why. They plan up to 4 wedding per day and are super busy ladies. The week that we arrived, they had 10 weddings at the resort. That being said, they did a fabulous job with planning out everything. Maria, Cynthia, and Cecilia were wonderful wedding planners and tended to everything. Originally, we wanted the reception at the lobby terrace, but this area was super busy with people and I am so glad we did not have it there. The ceremony was on the beach and beautifully decorated. We had a private party reception at the Petite Creperie restaurant by the pool and it was so fun. Definitely worth upgrading to a private party until 1am despite being more expensive. We had the following:

o   Dinner was feta &balsamic vinaigrette salad, lemon &vodka sherbet, wellington beef fillet, & Italian chocolate. It was all delicious. I am not sure if they served the coffee and petite fours because our group was too busy dancing all night.

·         Extra bar service for 4 hours (9pm-1am) $12USD/person/hour. I made them do a head count every hour as well because I thought this was a bit ridiculous. They did not want to charge me a flat rate.

I had some difficulty during the emailing process prior to leaving a few times. They had wanted to charge me more for the Mariachi band compared to their price list but then eventually agreed to their price on the list. Also, they forgot to place a centerpiece at one of the tables. This is not a big deal and I did not think about it until later on. One of the servers said they would send us a piece of our cake to the room the next morning with our included breakfast in bed and it did not come. Not a big deal but we only had a taste the night before because we were too busy dancing. Despite the really minor things though, we had a fabulous time. We really enjoyed the mariachi band.  The staff set up our place cards and the little decorations that we had brought down. I feel bad for not leaving the servers a tip that night as I was too busy and preoccupied with the wedding process itself. Some of the staff had mentioned to a few of our guests that they were not getting tipped for working late until 1 am. I think that should be mentioned during the planning meeting as well.  They did a fabulous job with serving us that night. The hairdressers were fabulous; mine was Vicky and I loved my hair. I had an updo and was really worried prior to leaving about the hair dressers so I was so happy and surprised that they did a FANTASTIC job on our hair. Just bring a picture of what you want and they can do it. Cynthia kept us on track with timing and she was great that night. If I had to do it all again, I would still have had our wedding there. We had a fabulous party and that is exactly what we wanted.