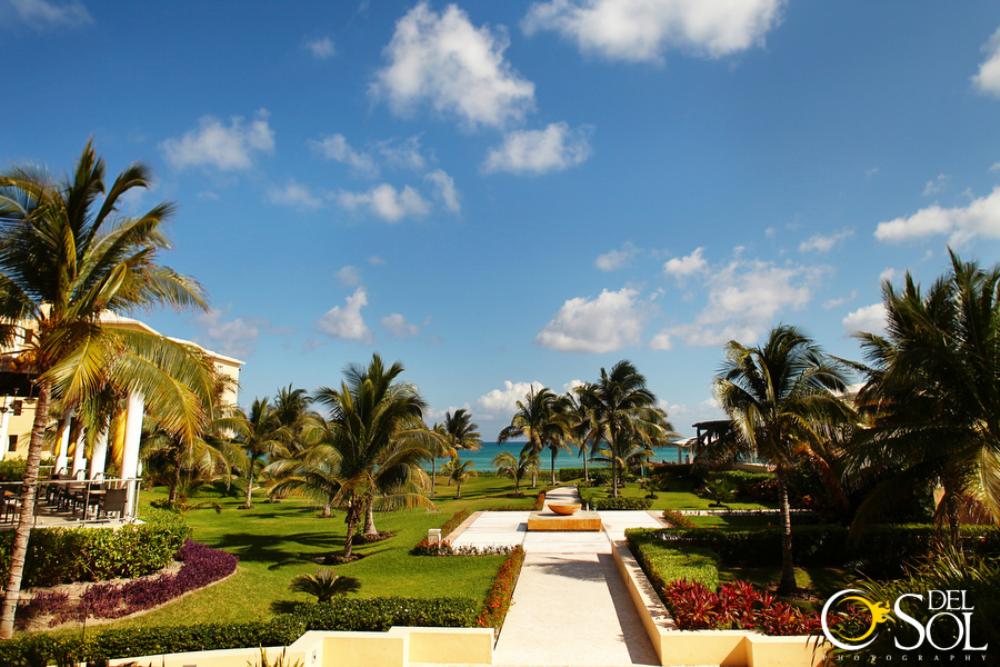 By candle23, November 3, 2014 · 1,381 Views · 7 Comments
Pros: Food, wedding coordinator, setting, staff
Cons: Rain!
We arrived on Saturday, October 18 around 5pm. Our package included a private transfer which we opted to take. It is with AmStar and we ended up getting an vehicle upgrade to a beautiful brand new Mercedes. Watching them pack in all of luggage was interesting but hey made it work! We stopped at the airport bar before getting into the car and grabbed two beers and two bottles of water for the drive. The drive to Now Jade was super quick, and friendly.

When we arrived we were brought to the preferred lounge to check in. They informed us that the hotel had no ocean front rooms, so we did not get the upgrade (which was actually the room we had confirmed with our TA, but she really didn't come through for us on anything...another review needed!). We were then brought up to our room which was absolutely beautiful. It was 8309 and looks over the adult pool and directly into the beach and ocean.

Our meeting with Ariadna was scheduled for Monday morning. We ended up rescheduling with her because we wanted to go on an excursion with family and Monday was basically the only day we could do it. She had no problems changing it to the next evening.

On Tuesday the boys had arranged a fishing trip, which ended up getting cancelled as it was raining like crazy! They decided to take a trip into Playa Del Carmen to Senor Frogs and didn't bring my if home until 6:30pm, and he was pretty drunk...they also ended up getting him a henna tattoo on his arm with two dolphins with very large penises.....thanks boys!! Lol

Needless to say he wasn't much help at the wedding meeting but it was short and sweet!! Went over the details and handed over all the decor I had brought. Though out the whole planning process, Ariadna responded to the few emails I sent within one to two days which I thought was very quick!

FI ended up going to bed right after and the ladies had a great little stagette for me! We partied in the disco until it closed, and then we all jumped in the pool in the pouring rain!

Tuesday was really the only rainy day we had.

Thursday was the wedding, my sisters and I went and had our hair done at the salon, it was alright...they basically do a small variation but we really all had the same up do despite showing completely different pictures! We had some good laughs! One of my sisters did not like hers at first, and they took it out and re did it and she was happy. They use so much hair spray that a monsoon could have hit and my hair would have not moved a bit! I had my makeup done by the salon girls as well....it was a little heavy in the black eyeliner but we just softened it a bit and it was perfect.

When leaving the salon, it was pouring outside....fingers were crossed hoping it would clear up!! Ariadna called up to my room shortly after to tell me we had to change the location from the beach to the front of the hotel..I was a little sad but said okay! About 15 minutes later, Ariadna came up to my room to drop off the flowers, and the sun was shining, I asked if we could still have the ceremony on the beach, and she agreed!

The ceremony was absolutely perfect, they provided a sound system with a microphone for our minister (my uncle) and they had someone play our music. It was seriously perfect. We had many people who saw the ceremony not from our group compliment it! I even got a few tears from my husband as I had my nephews wear little signs that read "Uncle Brad here comes your girl", "You better treat her right...", "Or I bite!" We had low expectations for them walking in order while holding the signs, but they did amazing!!

Right after we had wanted to get a group shot on the beach with us and our 78 guests...but it started pouring! So to the lobby we went for a few drinks!

It quickly cleared up and then everyone headed to the Mix Beach Bar for cocktail hour and we headed to the beach for some photos. We got to join in towards the end...almost all the appies were gone (only heard good reviews on them!), Darius the bartender was great, had a fresh drink before people could even ask for another! I had asked for the hotel photographer to do family pictures during the cocktail hour for our guests....this didn't really work out....but he got a few nice shots.

Before heading into the reception, we got everyone in the steps in front of the lobby for a big group shot...it was a little chaotic to say the least!

Onto the reception! We had it in the Bamboo Room at 7pm and paid to extend it until 12am. Best decision ever! We started off with our first dance...and then onto dinner! We had the tuna sashimi salad, lobster bisque, beef tenderloin and shrimp and almond nougat(?). It was all amazing except for the dessert, get the creme brûlée!!! Our guests were so impressed with all of the food! It was so yummy!

They had a bar set up and people could go up and ordered any drink they liked...very well stocked! They also served wine through out the dinner. Brad and I had our own server during dinner...it was very nice!

We had all our speeches in between courses and it flowed really well! Dinner and speeches were over by about 9:15pm and then dancing began.

We had a head table of 10 and then 7 tables in a semi circle around the head table of 9-11 people each and no body felt to cramped at all. The dance floor in the middle of the tables was the perfect size to hold the group...and it did!!

We hired DJ Discomovil, and they did not disappoint! They kept every single person on the dance floor until the very end! At one point one of the men decided it would be fun to take of his shirt....and then every single man followed! It was hilarious! They wait staff were trying so hard to not crack a smile!

Through out the whole day and then into the evening, Ariadna checked in with us to make sure everything was going okay. Was really great, we never had any complaints! She even came when they were taking everything down to make sure all of my items were returned to me.

I did get one of the girls in our group to bring all of the cards back to her room with her for the night as I didn't want anything to go missing.

After the reception ended, we headed to the disco...and danced the rest of the night away! Brad and I were the last ones to leave! We followed a bunch of others who went straight to the pool and jumped in! We did not....despite my husband asking if he could!

We came back to the room and had our romantic turn down service...with rose petals and swan towels, champagne and chocolate covered strawberries. It was nice. The next morning our breakfast in bed arrived at the right time and we enjoyed it!

Later on we had both of our suitcases returned to the room with our decor, as well as the included centrepiece and all of the bouquets. We did notice they didn't return our paper lanterns, but when I called and inquired they arrived quickly.

A couple days later we went and chose our 24 included photos....they made it into an album....they are okay, nothing special! Glad we had brought down our own photographer!

The videographer told us that he would mail our video in 4-6 weeks so we were pleasantly surprised when it was ready before we left. It was awesome! They have a bunch of go pros that they set up and they got some great angles. I am really happy with that! It is a little longer than the length of the ceremony so almost 30 minutes!

After the majority of our guests left, I did a trash the dress with my new husband. We took pictures having drinks in the hammocks at the adult pool, in the ocean, and then cannon balling into the pool!! So so so much fun!

We had it cleaned after by the resort. It was the best $80 we spent! Looks brand new again!

All in all, we had the most wonderful time here with all of our friends and family that made the trip! The hotel was beautiful, they did a great job with the wedding and making us feel like their priority on our special day!!