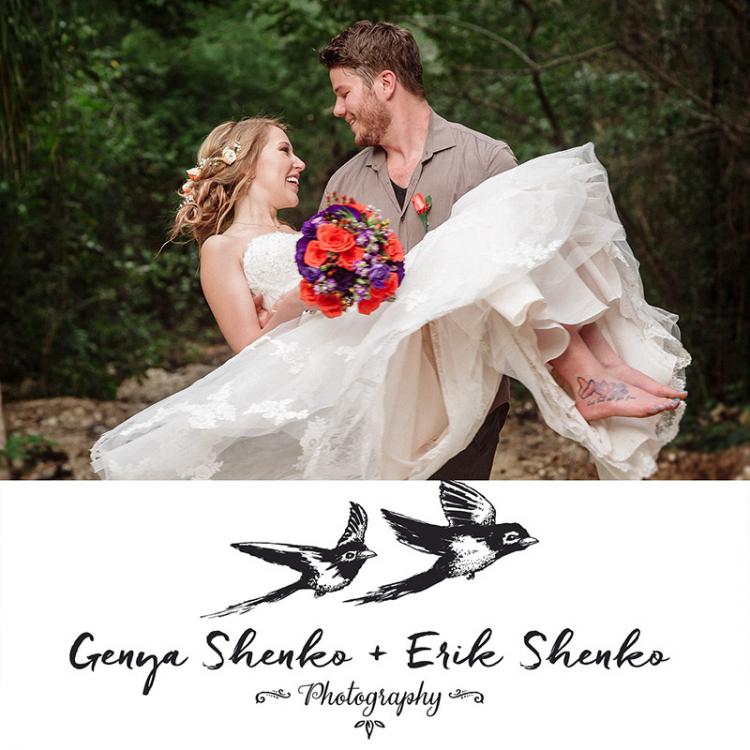 When many people can only think of the few classic shoot everyone does in this kind of set, Genya & Erik used everything to make as many various pictures as they can. Every rock, every bush was good enough to try a shoot. Some was even at different time of the day

so they made advantage of any light they could.
Their teamwork was awsome to see : when one takes safe shoot, building a solid base for the book, the other leashes out his imagination and then they switch ; it was like a neverending ballet !
The mood was euphoric and effective. They knew when to be discreet, when to lead us and even how to include us in the process.
They are very focused on their work and when bad luck happens on their stuff, they keep up their pace and adapt themselves like it was nothing.
It was a really good time and these memories are 100% part of all the great memories we got of the wedding.

Then came the Trash The Dress...

All we wanted for the pictures of us was a natural set and the idea of "ruining" the dress was fun.
They came to us with a cenote. They chose Chaac Mol, a half opened one, for a shooting session supposed being for few hours.
As a result we went to the cenote right on time (a really underestimated thing in Mexico ;)  ). We did all the dry shooting the same way we did on the beach : using every tree, every rock, every spot. They used everything we suggested and even tried our ideas further than we thought!
When the light was perfect for the shooting in the water, the effectiveness increased a bit so no light was wasted.

Everyone enjoyed so much the day, we didn't see the 8 hours passing by !
It really was the work of 4 people in a great alchemy !

The atmosphere was so friendly that it still is now, 2 years later :D