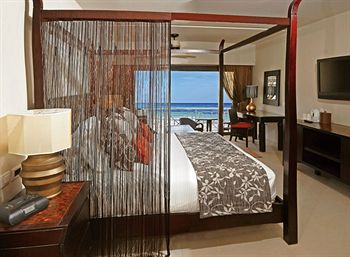 We just got married at Secrets St. James July 13, 2013. It was everything I hoped it would be. The wedding was beautiful. We were a little nervous about the weather because the previous days it rained. However, even though it was a bit hot the sun was out shining. We had 50 people and got the Ultimate Secrets Package. However, as you will read I’m a bride on a budget and was unwilling to pay for hardly any upgrades, so I brought my own decorations and made my own centerpieces.

Rocio was our lead coordinator at the hotel. She was very nice. She try to accommodate us as best as she could. She told us to keep in mind that based on the previous days weather our wedding reception may have to be moved inside, but she would try her best to have the ceremony outside. But, it didn’t matter because our wedding day was beautiful.

When you first arrive they have will have a meeting with you and your groom to finalize all the details. The Meeting was not very long. It lasted about 40 min. We met with the minister there as well. His name was Terence. He was very funny and made the wedding a blast.

We upgraded from the mento band which was included in our package to the steel drum band for $200. The guests loved them.

We did not pay for a wedding rehearsal ($120). My husband thought it was not worth the money. So, we met with the bridal party and talked about the details. We’re so happy we didn’t because half of them were extremely late anyway and everything turned out fine.  During the ceremony the minister walks you through everything anyway. So, we just need  to discuss with your bridal party who is walking with who, the order, and where they should walk down.

We loved the preferred club. They were so nice and pleasant. They will accommodate anything you want. Also, there are snacks downstairs in the lobby which comes in handy when you are at the pool. In addition, you get free wifi which everyone wanted to use.

The night before the wedding the groom did get a separate room which was nice.

I thought the decorations at Secrets were extremely expensive. So, I brought everything myself and we delivered our OOT bags ourselves (we wren’t paying $4 a bag to have them delivered). However, we paid secrets to put them out for us which was about $50. I didn’t want to worry about setting anything up. I just had to explain how I wanted everything. I had 2 suitcases for decorations: 1 for the flowers and 1 for table decorations. My bridal bouquet was made by the florist and Michaels. I made the bridesmaids bouquets myself. Just go to Michaels when they are having the 50% off sale and pick some that you think will be pretty together.

We had red chair bows and table runners and rose petals which have to be biodegradable. I made my own centerpieces. They were 4 picture frames taped together in a square. Since we are high school sweethearts and have been together forever… 2 pictures were of us back in high school and the other 2 were pictures of us now. They came out beautiful. In the middle I put a large battery operated candle which illuminated through the frames at night. Then, around the frames we put votive candles. We saved a ton of money doing it ourselves. So, go to Michaels and get everything when it’s on sale. It will be worth it.  Oh we even bought the ribbon and topper on our cake so it could be pretty too.

We had a sunset wedding. So, the morning of the wedding I hung out with my bridal party by the pool. I ended up seeing the groom twice that day. Booooo. Then, I went and got my hair and make up done by Ms. Joyce at the salon. Some of my bridesmaids got dressed in their room and some came to mine. We had our private photographer which was a friend (Keenan Peterkin: www.keeneyegallery.com) who took pictures when I was really  getting dressed. Then, I had enough time to go downstairs in front of the preferred club and take pictures with my bridemaids and mom which was a great idea.

Also, the hotel photographer took pictures of us in the room and on the balcony which came out beautifully.

Rocio came to get us. The bridesmaids walked down with one of the other coordinators. Rocio took me in a golf cart. The ceremony was lovely. We wrote our own “words of expression” which is what the minister called them. We had a sand ceremony and jumped the broom which we all brought ourselves.

During the ceremony and reception we used our own radio. We got the BOSE speaker which we plugged into the gazebo. We saved a ton of money doing this too. We just plugged our IPOD into it and we already had the music in order. 2 of our friends were the DJs during the ceremony. So they could play and stop the different songs …. Bridal party processional… bride processional…. Sand ceremony…. Recessional….

Everything was wonderful. We were pleased with our dvd and photos which were given to us before we went back home.

At the end of the night we had wish lanterns which was a big hit with our wedding party. It was a perfect way to end the night. However, we were lucky the servers were there to help us because we had no idea what we were doing.

Secrets St. James was a great place to get married. The food was yummy. The guests really enjoyed it. I was too excited to really eat. But, things can get very expensive if you buy it through them. So, be a do it yourself bride. Like I said, the only extras we got from them were the upgrade to drum band and tiki torches. We bought everything else ourselves.