Jump to content
Riveria Maya Corridor
Barcelo Palace Review
Followers 0
This is a review of: 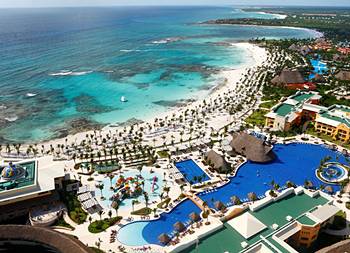 Claudia was our wedding planner and she was amazing. She always replied to my emails promptly, and though it took her a few times to answer questions at times, in the end she did always manage to help me figure things out and was far more organised than I was. She left us a message the night of our arrival and we met the following morning where she had everything ready to go. She made sure everything ran smoothly the whole day and we couldn’t be more thankful for her help.

I decided to splurge and went with Adrian and his team for hair and makeup and after dealing with the hotel spa on another occasion (for my manicure/pedicure), I was glad I did. The spa is unorganised and really doesn’t understand much english so communicating was difficult. They were supposed to pick me up for my appointment and didn’t, so I had to run to make it there on time and other things that made it clear I didn’t want to be in their hands on an already stressful day.

Adrian and his team were so amazing. They came to our room and were so friendly, it put everyone at ease and made the mood energetic and fun. I really didn’t have anything in mind for my bridesmaids hair but they managed to do something beautiful that all 4 of them liked, and for my own hair it was exactly as I wanted it. The makeup from adrian for my mom and I was unbeatable. I’ve never had makeup done so nicely and stay on so perfectly (even after my fiance smooshed cake all over my face!). It was a hot sunny day so I was more than thankful for the sweatproof makeup.

We went back and forth a lot on the music and ended up choosing the violin. To be honest neither my husband or I remembers anything about what she sounded like but I think it was nice. There was no issue with her being too quiet as I had heard people complain about that on the forum before.

He was really good, and we were just delighted because we had originally been told our ceremony would be in Spanish since it was a legal ceremony, but it wasn’t. It was quick and straight to the point, and we thought it went nicely. The only problem we had was before the ceremony started he asked my fiance if he had any words/vows to say and my fiance made it clear that he did not. When the time came, he turned it around on BOTH of us to say something on the spot! It was horrible as both of us didn’t know what to say and are not good under pressure :P

We had the ceremony at the Palace Gazebo and were so happy with our choice. It was so beautiful, and there were hardly any people around. Most importantly, I was still able to wear my high heels! We had 36 guests and everyone fit nicely around the edges. I just loved walking down that aisle of the palace.

We didn’t have a formal cocktail hour but our guests made their way after the ceremony to the Carey Lobby Bar. I have to say this was a downfall of our day. Some of our guests stayed at the other Barcelo hotels (tropical, etc) and were given such a hard time by the staff. They wouldn’t serve them anything and I think even wouldn’t let some of them in. We found them really pretentious here and avoided it as much as possible. It really was a shame but oh well.

Our reception was held at Playa Azul and I think that this is hands down the nicest place for receptions. It’s the most secluded and has an amazing beach to dance all night on. I will try to get some photo’s up.

I made a lot of the added details myself, including name cards, table numbers, cake topper etc. to try and keep things on budget. But when it came to setting it up, everything was completely done perfectly by the staff. The scenery is so beautiful that really less is more. We chose vases of sand with candles for the centerpieces and it was a perfect touch. We were originally just going to have the free ones, but this added a nice touch of light as the sun set. We paid for 8 strings of lights on the trees but they ended up lighting them all. The chairs were typical chair covers with our colour of sashes.

We bought maracas from the resort, and after pricing them out all over Playa Del Carmen, we actually got a better deal getting them at the resort. We payed about $1.40 each and added little thank you tags to each one. They were a hit with the guests.

We weren’t overly pleased with the resort food in general so we weren’t sure what to expect at the wedding, but we were pleasantly surprised. It was the best food we’ve had in a long time, and everyone agreed. It wasn’t only good for resort food, it was just generally really good. On top of that, everything came out at the same time, and hot. The serving staff was phenomenal. We had to tip them extra since we were so happy with their service. Nobody ever had an empty glass either, which probably helped too. Our menu included Thai Salad, Asparagus Soup (surprisingly a hit with everyone!), Surf and Turf (I’m not generally a steak or seafood lover but this was amazing), and Chocolate Lava cake (which was another, more obvious, hit). By the time our wedding cake came everyone was stuffed, but those who tried it also raved about it. We had a strawberry and a pineapple tier which was definitely unnecessary. They had said 1 tier only feeds like 20 people or something so we went with 2 but the 1 tier was huge.

We had the mariachi band come in after dinner and they immediately got everyone up and dancing. Everyone loved them and had so much fun dancing around and even doing a spontaneous limbo with them playing. We even did a no-no and got up dancing before our first dance as we couldn’t resist. They are expensive but I am really glad we had them. It made the whole thing more Mexican feeling.

We just had our ipod with the playlists set ahead of time for dinner, dancing, speeches etc. For us, it was ideal. I wouldn’t have wanted the DJ even if it was free, because the ipod was just so perfect and played exactly what we wanted, when we wanted.

We extended the reception by an hour so it was from 7pm to 11pm. I was worried we would still be rushing since we wanted time to dance, but it really was the perfect amount of time. We were able to relax and enjoy food, speeches, cake, etc. and still had plenty of time for dancing. When it came to 11pm, the ‘more mature’ people were ready to go sleep and the rest of us continued on at Jaguars. It was so much fun, I’m glad we did. It’s an amazing club for a resort, though I did get changed first as my arms couldn’t hold my dress up any longer!

I don’t even know where to start with our photographers because they were so amazing. We had Foto Take It, which is a young couple from Argentina. They are so sweet and captured every moment of the day. They were with us from morning til night, and even rode the bus with us, taking pictures along the way. They made everyone comfortable and we had such a great time photographing with them. They even went above and beyond when my fiance forgot his white shirt at our TTD session and they gave us theirs. I can’t recommend them enough.

We had an issue with Kodak (the resort photographers) who I had to basically yell at to honor our deal with Claudia to pay only $300 fee NOT to use them, since it is now $500. I think this whole set up is ridiculous and I was annoyed enough about paying $300 so there was no way I was going to pay more.

Really terrible. I can’t begin to tell you the frustration they caused to us and our guests. Every time we called for something we were passed around from person to person, put on hold, and occasionally just disconnected all together after 15-20 mins on the phone. It was beyond aggravating. The night before the wedding our internet was disconnected and we were unable to get it until 7am the next morning when we were waiting on important emails from the hair stylist/photographer, and again was just passed around getting no where on the phone or in person when we went to the front desk to sort it out. The resort seems to consistently get criticized for its front desk so you would think they’d do something about it, but alas.

The good thing was we checked in fine, and got the premium wristbands with free wifi and room service (which we took advantage of). We didn’t get a sea view but we weren’t picky enough to complain and actually liked the private view our room did have.