Jump to content
Playa del Carmen
Dream wedding
Followers 0
This is a review of: 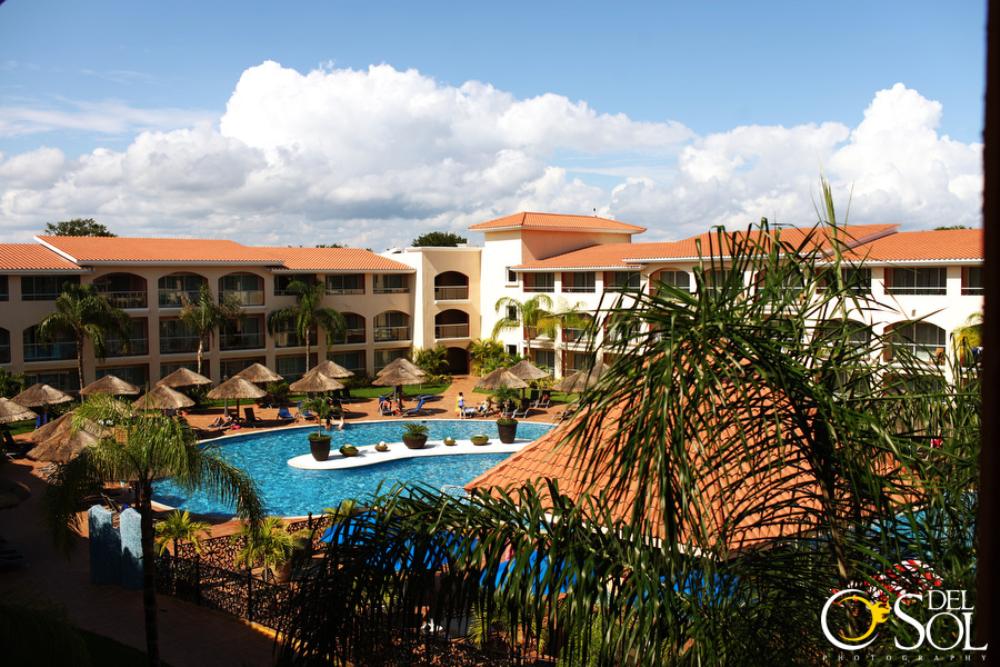 We were a group of 21 adults a child and a baby who went to Sandos Playacar from March 1st, 2012 to March 9th from several cities in Canada. My husband and I were married at the hotel on Monday March 5th.

We arrived just after midnight so there was no waiting. We had our room key and the luggage loaded onto a golf cart in about 15minutes. We took a thrill ride from the lobby down to the beach rooms were most people in our party were staying.

We were first assigned to room 2228 which was the last room on the south side of the resort on ground level with a view on the beach. A beautiful room with contemporary decor and easy beach access. As part of the wedding package we were entitled to an upgrade. The next morning we went back to reception to ask for larger room. They were hesitant but I was firm that if there was a beach front suite available that we should be entitled to the upgrade. We were given the keys to room 1320, an ocean front suite on the third floor of the north block. We were hesitant at first as we liked being on the first floor having direct access to the beach, but in the end taking the suit was a great decision. It has a bed room and living room, two flat screens (not that they were used), two bathrooms and two balconies with the option to link to an adjoining room. We wouldn't have been able to have the whole bridal party get ready together without the space and extra bathroom. The decor was nice but the bed was hard. My step-daughter slept on the sofa bed in the living/dining room and it was very comfortable.

One guest of ours stayed in a hacienda which is a bit more dated than the rest of the resort but nice if you want privacy. Another couple stayed in the Rivera section which is a 5 minute walk to the beach but close to two a la carte restaurants, a lunch and breakfast buffet and the nicest pool. Great if you don't have kids.

This was my first time to Mexico but it just doesn't compare to service in resorts and hotels in Canada. Everyone from maids to waiters to reception staff went out of their way to make every one of our guests happy. From towel animals to waiters who would run from the buffet to another bar to collect ingredients to make a special drink. We really felt like everyone there were experts at their jobs. I never had a request go unanswered, the staff really made the place special.

Most nights we ate at the buffet as it was hard to coordinate everyone and the buffet allowed us to all come in when we were hungry and sit in the same area. The food was great and varied every day. The hot food was hot and I loved the pasta chefs. The lunch resto in the Rivera section had some great pizza and should not be overlooked. We did visit the Mexican restaurant. Some loved it and went back several times but I preferred the buffet. We also visited the French restaurant. The quality and presentation was something you could easily find at a restaurant where the meal would cost over $100. Our friends also visited the Brazilian and Asian restaurants and they enjoyed them too.

Around the pool and on the beach was cleaner than my house. Each morning they remove all debris from the beach, all day they moped around the pool, at night they sift through the ash trays to remove the buts. You couldn't find dust or grime if you tried. I had no issues with drinking the water, eating the food or walking barefoot around the resort.

We had gold bracelets but didn't much use them although the level of room we had is only for the select club. I did use the computers and internet in the select club bar and the day after the wedding we spent a lot of time in the select club section of the beach and in the Rivera section for privacy. Over all, not really worth it if you don't need the bigger ocean front room.

Organisation started months in advance with the help of the dedicated wedding coordinator Lupita. We had a meeting with her on the second day of our trip. The meeting entailed confirming times and details and paying for the minister. We were thinking about buying flowers in town but the price she quoted us in the meeting was reasonable and I'm really glad we got them from the hotel. They were perfect.  We were married in the wedding pavilion that overlooks the beach at 4:00. We chose this location for several reasons: one the wind on the beach was very strong and would make the microphone useless. Two, the Mexican government charges a fee for all beach weddings, Three, being on the hotel grounds and not public beach there was security lining the route and around the pavilion so there were no spectators in the photographs. On the beach you risk having some guy in a speedo in all your pictures. We saw a wedding later in the week on the beach and I wonder if the guests heard anything at all due to the wind. The location was beautifully decorated in the colors we chose.

The day of the wedding the bridal party participated in the yoga class. I don't think we were very zen as we all had a major case of the giggles, but it was a great start to the day. The wedding was at 4:00 which seems like there's lots of time but hair and make-up and eating all take up a lot of time. I did my own hair and make-up and that of my step-daughter. This was a cost saving initiative but I'm also very picky and wanted to be in control of how much make-up I was wearing. It turned out great so I'm glad I saved the money. We ordered room service as I didn't want to go to the buffet in curlers.
Lupita delivered the flowers around lunch and then there was a flurry of prepping and dressing and photo taking before Lupita's assistant returned at 3:45 to take us on our walk around to the wedding pavilion. Everything was well timed and organised by the hotel staff. there was someone in charge of playing the music from my iPod. I did notice though, that you could still hear the music from the Mediterranean buffet. You might ask that it be turned down for the ceremony.

The minister made us feel very comfortable and we liked the service she did. There was a champagne toast after the ceremony and we took pictures on the beach before the reception.

The reception was in the Italian restaurant which was closed the week we were there. But, that was actually great news as we had the whole place to ourselves with some wonderful servers. We got our food from the main buffet, the two are connected. We had plans to go to the disco after, but ended up just hanging out in the boulevard. I wouldn't change a thing about that day, the staff and the location made it unforgettable not just for my husband and I but for all our guests too.