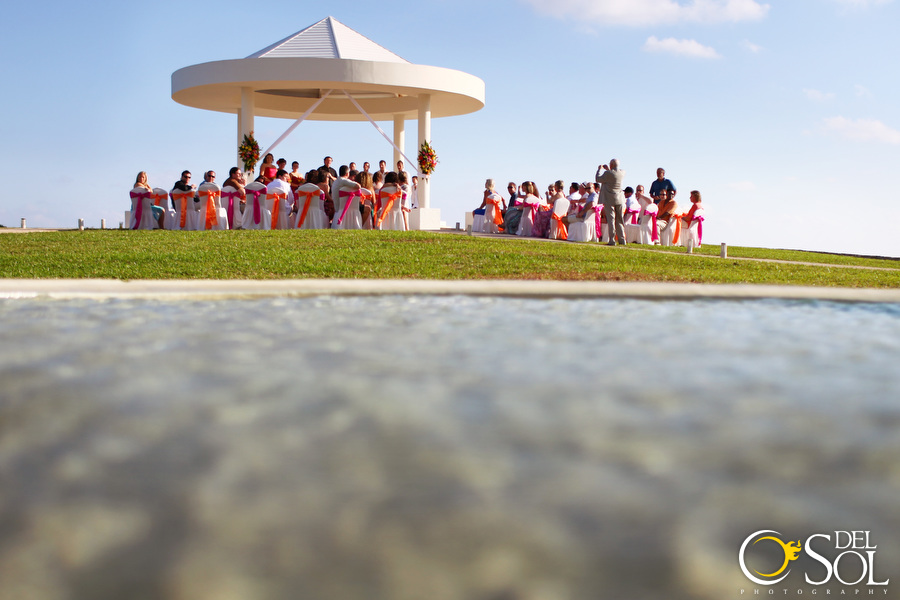 The flight, arrival, cust oms, transportation went pretty smooth. We had 11 people on our frontier flight from our group and had no issues. Of course, I was the only one in our group that got a red light in the Cancun airport but had no issues when I told them it was my wedding. They saw my dress looked in my bag and we were on our way! We all grabbed drinks from the Margaritaville stand outside the hotel and we were on our way!

Our arrival at Dreams was pretty smooth. We had a few issues with our guests. Most people reserved king rooms and a few of our couples got stuck in rooms with double beds. My husband and I were put next door to his parents. Obviously that was not going to work out for us. When I called the front desk they charged us $350 to upgrade to the preferred tower in a room with double beds. I was NOT happy about that but really didn't want to stay next door to my future in-laws on our wedding/honeymoon. We did eventually get moved to a honeymoon suite but we were still charged $350 and had to move rooms twice.

The resort was absolutely AMAZING! It was beautiful, well kept, and had lots of things to do! My favorite restaurant was Oceana. I am not a fan of seafood but the steak was amazing! We ate their a couple of times. The breakfast buffet was really good.. We were there for 7 days so eating the same thing every morning got a little old. It wasn't that great for lunch or dinner but was a quick option. We went to Paloma Bonita one evening and it was AWESOME! We did the price fixe meal which was $15/person including drinks.

Was perfect! Cecilia was prepared and had all of our previous emails. We picked out a few additional things and we were on our way. We took our own centerpieces. They included a vase, candle and seashells. We wanted sand from the beach in the vases.. Cecilia had all of that taken care of. She also added a couple additional things to the table. It was beautiful!

We chose to have our rehersal the morning the day before the ceremony. Cecilia did a fabulous job organizing everybody and making sure they were with who I told her they should be. It was quick and painless.

Day of the Wedding:

I was SO relaxed the entire day.. I had breakfast with my family, went to the beach for a couple of hours with our entire group, and then off to shower and get ready for my 4pm ceremony. My appt at the spa for my hair was at 1pm. I wish I would have scheduled it at noon. My hair was gorgeous! I absolutely loved everything about it but it took about 2 hours.

We chose to go to go with the resort photographer. He did a fabulous job! We loved all of the pictures he did. The only thing I would have done differently is added some additional time. We had lots of family taking pictures at the reception, but I didn't get all the pictures of the wedding party I would have liked.

The food was awesome! It was the best meal we had during our stay. We had a sit down meal for 42 people. The waiters were great! The DJ played good dinner music and it was a lot of fun. After dinner it was the speechs and then the party got started! We had such a good time! Everybody was dancing and moving around the entire time. After the reception we moved over to desires.. Not everybody went but it was still a great time!

DJ: We had Luis.. He was nice and did a good job. We chose not to tip him. I had 3 sisters at the wedding and anytime they would request a song he would say that "I" was the boss and they couldn't. During our meeting I specifically told him anybody could request  anything. I wanted people to have a good time and if they wanted a song play it. Also, a couple of times I tried to go talk to him he was on his cell phone. My opinion is that we paid almost $1000 for him. He needed to be working the entire time and if anybody needed anything he should be ready. It wasn't like he hung up or put the person on hold when I went to talk to him.. He stayed on his phone and finished his conversation.

Flowers: Way better than I could have ever picked out myself! i had something picked out that wasn't available. Cecilia told me not to worry she would make them beautiful... They were absolutely AMAZING!

Cake: It was great! Cecilia upgraded the cake for us free. The taste was good and it was pretty.

Our wedding was absolutely wonderful! I wouldn't change anything about it!