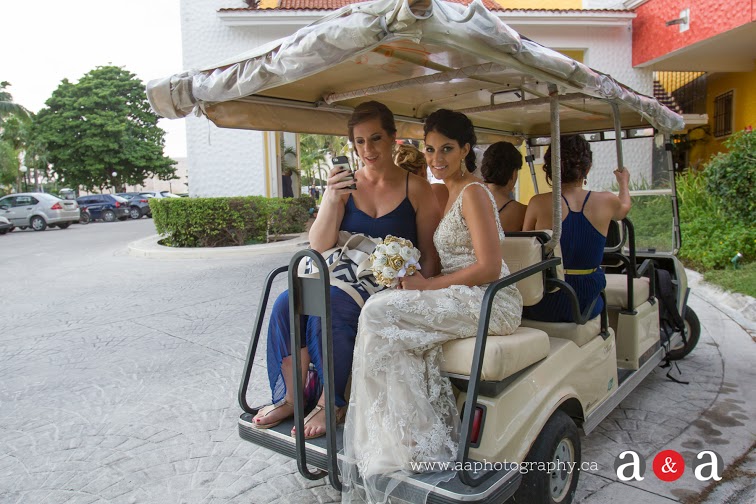 MAKE SURE TO ASK FOR A PRIVATE CART

I asked and even said id pay extra for a cart large enough for bridal party because we had little time to take photos and the rsorts are so large - this was NOT offered and we spent about a good 15 minutes waiting for one until the photographer at resort piled all women in and men had to walk....(from coba to hacienda is far!) also asked for one and took a while for someone to come - then after hacienda photo shoot we had to get to the reception quickly, so again, was driven nicely by photographer (women only) and dropped off at lobby of coba - asked the bell boy for private ride to the private reception at pool (bc it was far, the shoes hurt by now and we were in dresses and sweating!), and they said no until I had to slightly be stern with them and say "Are you guys honestly not going to offer to drive a bride and her ladies to her own reception?!?!" and finally one bell boy said "fine, get in!" (when there were about 5-6 trollies EMPTY in the front! I am not trying to sound like a bridezilla, but honestly? I even said id pay them! pretty dissappointing. The men walked and arrived late .... Brides KEEP NOTE "MAKE sure there is a trolly from the start of the day designated for you guys!!!!

Photo Information for MAKE SURE TO ASK FOR A PRIVATE CART